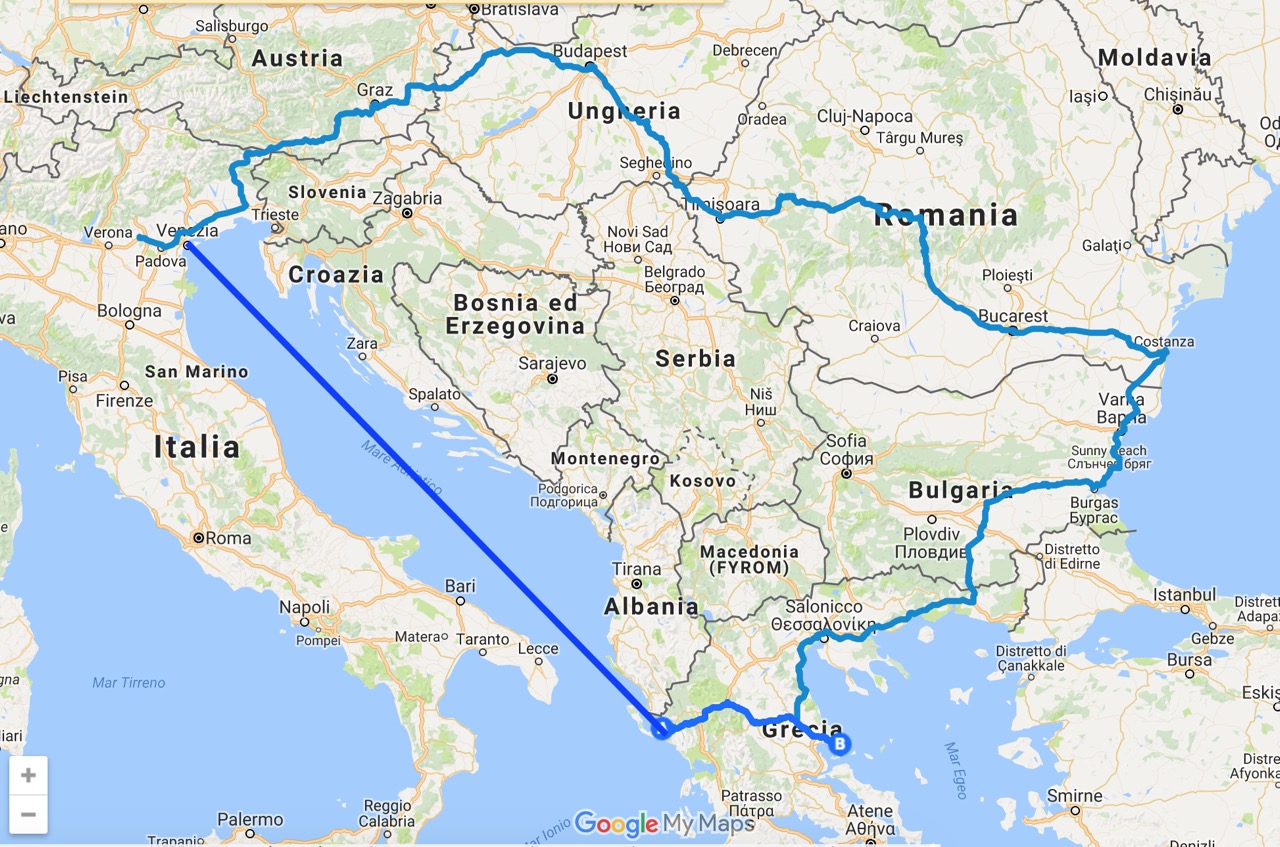 After a vacation on the United States, it was the time for me to go for holidays in Greece. I use to go every in a small village in the area of Pelion every summer, and this time I wanted to do something slightly different: a long motorbike road trip around Eastern Europe. This is a summary of my travel.

My equipment consisted in my Yamaha XT 660 X, with a top box and a pair of saddle bags. I also had a smartphone holder and a USB charger. The trip was the one in this map: I wanted to go to Greece by traveling through Slovenia, Croatia, Bosnia, Montenegro ed Albania, but I could have problems on the borders ‘cause my motorbike is technically my father’s. Because I wanted, like every summer, to have my birthday (9th of August) in Greece, and I could start only after the 5th, having to stop longer at some border wouldn’t be an option.

So I decided to take the ferry from Venice to Igoumenitsa (a 100€ ticket). I slept for two nights on the ferry: the first night on the deck and the second one inside, on the bar’s couches. I arrived at the Igoumenitsa port at 11am and drove straight to Argalasti. I stopped just for gasoline and for taking some pictures, and to be honest the travel already looked long (and it was just 350km). I arrived in Argalasti in the afternoon and pitch my tent next to the sea in a friend’s property. That night I had my birthday in my favorite place in South Pelion: the taverna of Ioannis in Argalasti.

My two weeks in Pelion were funny and intense. I was able to go to sleep at night before 5am only 3 times (at about 4am). I had a great time hanging out with friends I have there and meeting new people.

One day, unfortunately, I fell with my motorbike. My friends took me to the hospital, everything was ok but I couldn’t swim till the day of my departure from Pelion. Also, a week later I broke the clutch cable.

I then left Argalasti for going North to Thessaloniki. I stopped in Platamona to have lunch with a friend, and then I spent the night near the lake Volvi.

The day after I entered Bulgaria. No problems at the border. The road was nice, and when I arrived at the Black Sea I stopped in a camping named Zora. The great thing is that highways are free for motorbikes! I haven’t found many bikers, but the ones I met always greeted me. It was funny, and the roads were interesting. After the night in the camping, I entered Romania. At the borders there was a huge queue, but luckily with the motorbike I skipped it. In Romania too, highways are free for motorbikes, and even the tolls for the bridges (were cars have to pay even it they already paid the Highway Vignette). The roads were really nice. I stopped in Constanza for lunch and to see the Black Sea again, then I drove to Bucarest. Google Maps, in various occasions, suggested me to exit the highway for driving through smaller roads in the countryside. After one night in Bucarest (I slept in a hostel and the staff let me park the motorbike inside the gate) I drove to Timisoara. I decided to take it easy and I had a trip on the Transfagarasan, one of the most beautiful roads for motorbikes. In the evening I visited Timisoara and spent the night with the guys in the hostel. Hostel were at 8€ for one night! If you want to save 15€ for a hotel night, subscribe to Booking.com using this link.

I then drove to Hungary. The border was really queued, and I skipped the line again with my motorbike (and cars drivers got really upset about it, but the officers were ok with it). At the first gas station, I bought the Vignette (around 4 or 5 euros). Roads were really nice too, and I decided to avoid highways as much as possible. When I arrived in Budapest, I didn’t like it very much. Then, walking around the city, I started to like it more. In the city center I met some vegan activists and I became friend with them: we went to dinner and dance together.

The next day I rode to Graz, Austria. In the morning, when I was still in Hungary, it was raining, while in the afternoon in Austria it was pretty cold. No problems at the borders, and I had to buy the Vignette for 5€. At night I stopped in a hostel and had a walk in the city center. The next day I drove to Italy, straight to Vicenza.

This site uses Akismet to reduce spam. Learn how your comment data is processed.